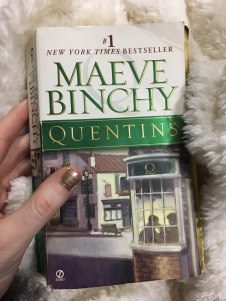 Is it possible to tell the story of a generation and a city through the history of a restaurant?

Ella Brady thinks so. She wants to film a documentary about Quentins that will capture the spirit of Dublin from the 1970s to the present day. And Quentins has a thousand stories to tell: tales of love, of betrayal, of revenge; of times when it looked ready for success and times when it seemed as if it must close in failure. But as Ella uncovers more of what has gone on at Quentins, she begins to wonder whether some secrets should be kept that way…

Every now and then I take a break from my usual book genres (horror, mystery, classics) and their heavy topics and thick plots and give my brain a break. When I picked this book up out of my tbr pile in my bookcase, that’s what I was doing. Unfortunately, regret usually follows when I decide to do this.

Family or love drama stories are not my thing. There usually has to be some sort of supernatural or murder element or something for it to grab and hold my interest (like Vampire Academy and If I Stay). This book, while hosting its own wealth of drama, did nothing to captivate me.

I’ll start with the characters. ANNOYING. Ella Brady is one of the most annoying characters I have ever come across in a book. It’s obvious that Binchy tried to give her some sort of depth and personality, but she was so unrelatable. She was clueless about everything, her family upbringing (and family itself) was ridiculous, and she ignored facts when they were right in front of her face. I understand love making you blind, but if someone treated my family and friends the way Don Richardson treated hers I would have no mercy for his pathetic, lying self. The only redeemable characters are Patrick and Brenda and some of the other side characters.

And the plot… again the only redeemable part of the plot has nothing to do with Ella except for the fact that she’s involved in making the documentary. If you took away Ella’s entire storyline, you would have a better book here. The story of Quentin and Patrick and Brenda and Blouse is good. I even like Nick and Sandy and the documentary idea. But Ella’s plot line is just infuriating.

I had hopes for this book because it is set in Dublin, Ireland, but I’ve read trashy romance novels that didn’t get under my skin as much as this book did. Maeve Binchy is a New York Times Bestselling author, and if I one day get the chance to read one of her other books I will. Maybe this one was just a fluke. I believe that in most cases just one book is not telling enough of an author’s skill. Hopefully that is the case here.

View all posts by allthingslit16